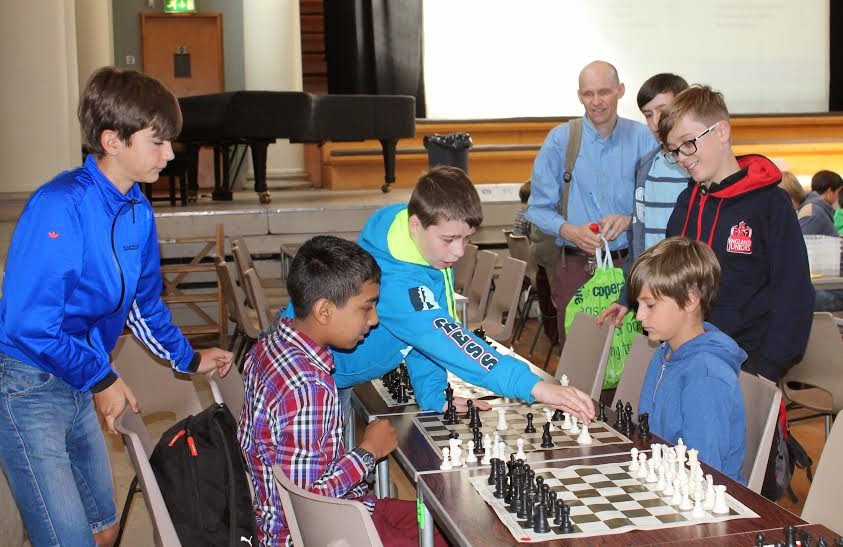 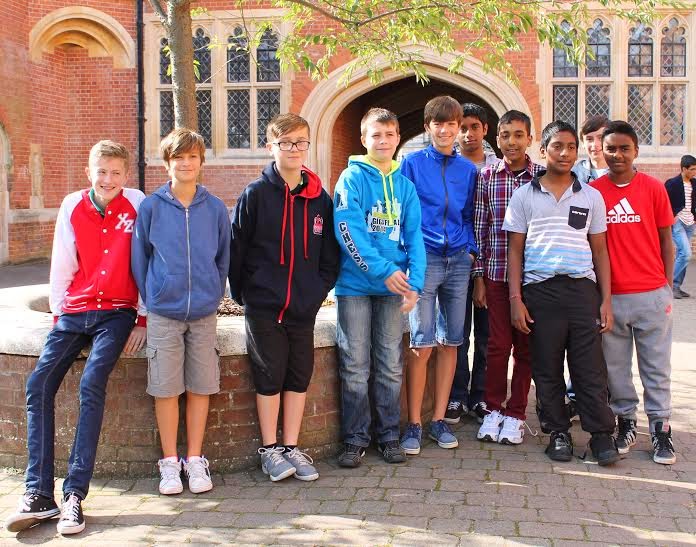 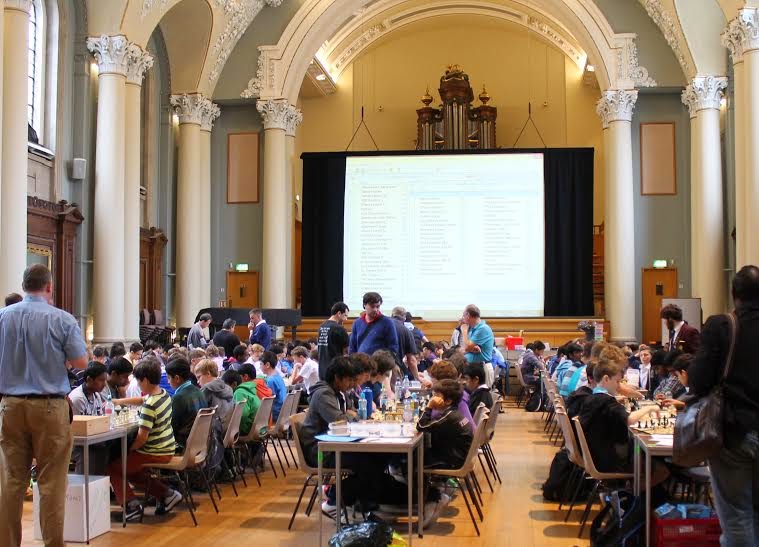 Yesterday KEGS sent a team and three reserves to the ECF Secondary School Rapidplay Chess Tournament at Eton College. Our team was composed entirely of Knight players and Robin came along as team captain. We were also accompanied by Mr Worrall, the Head of Music at KEGS, who has a keen interest in chess.

When we arrived we found out that to make the number of entries even we would have to produce a B Team. So our three reserves, along with Ben (who we made an honorary KEGS student) and two reserves from another team formed 'KEGS B'. Their results will be given as out of 4, because we did not pay attention to the scores of the reserves from the other team.

In the first round KEGS A were faced with the easiest match of the day, against Hampton School C from Surrey. Because our opponents were relatively weak, Elliot, who played as KEGS A Board 2 for the rest of the event, volunteered to join KEGS B, who had a much tougher match against Dulwich College from Kent. KEGS A won their match fairly easily 5-1, but unfortunately KEGS B lost 1-3, but it might have been 1.5-2.5 had Elliot's flag not fallen as he was about to agree a draw against a much higher rated opponent.

It was a reversal of opponents in the second round, as KEGS A faced Dulwich College (who seemed fairly surprised to be facing Elliot again) and KEGS B played Hampton School C. KEGS A narrowly won their match 3.5-2.5 after I just about managed to turn a completely lost position into a win on Board 1. It was a shame, however, that KEGS B lost 1-3 again.

In the third round KEGS A faced Mill Hill County High School from Middlesex and managed to win convincingly 4-2. KEGS B also did remarkably well, winning 4-0 against Bedales School, Hampshire.

Unfortunately KEGS A's winning streak was doomed to end in round four, when we were matched against last year's winners, Hampton School A. We were outgraded by over thirty points on every board and lost 1-5, with two draws from myself and Scott. However, it could have been 2.5-3.5 had Elliot's opponent not kept cool under huge time pressure and if I was able to convert my large advantage into a win. KEGS B, however, did well, scoring 2/4 against Wilson's School C from South London.

In the final round KEGS A came up against the Hall School from Central London, who were coached by none other than the reigning joint British Champion, IM Jonathan Hawkins. KEGS A did extremely well against reasonably strong opposition, scoring 4/6 and securing their fourth win out of five for the day. KEGS B also finished strongly, scoring 2/4 against Simon Langton Grammar School B from Kent.

Overall KEGS A scored 17.5/30, finishing joint 9th out of 37, a fantastic achievement. KEGS B also did well, scoring half points with 10/20 (counting the KEGS players).

I would like to thank Robin for organising the trip, and Mr Worrall for accompanying us.

See you guys next Tuesday!

The end of the summer :(

Well, that's it. The summer's over, we've gone back to school, and the chess season has started again. We're back to weekend stays in different counties, The long award ceremonies at the end of every grand prix and that horrible feeling you get when you come home from a chess on Sunday evening and realise that you've got school tomorrow. But that's what makes chess fun. Sure, the drives can be boring, and when you get drawn against someone with a grade of 150 in the first round of a tournament it's not enjoyable, but it's when you reach out with your hand, having just played a brilliant game, and say checkmate. So although it will get colder, the days will get shorter and the schoolwork starts all over again, we can always play chess.

Richard also played in his second simul at the club. He played against Niall (who usually goes to our sister club) Elliot, Scott (me) Samiran, Shagilan, Mernan, Shazia, Nardia, Luxathan and Josh. This time Richards phone did not go off and he did not draw with anybody. Everybody was comprehensively beaten by Richard except Elliot, who during some stages of the game looked like he could win. However, Richard's knowledge and experience prevailed in the end, and Elliot too was beaten.

We also have a picture of Sebastian during the summer holidays. Here he is playing chess outside the Kazan with his granddad in Russia 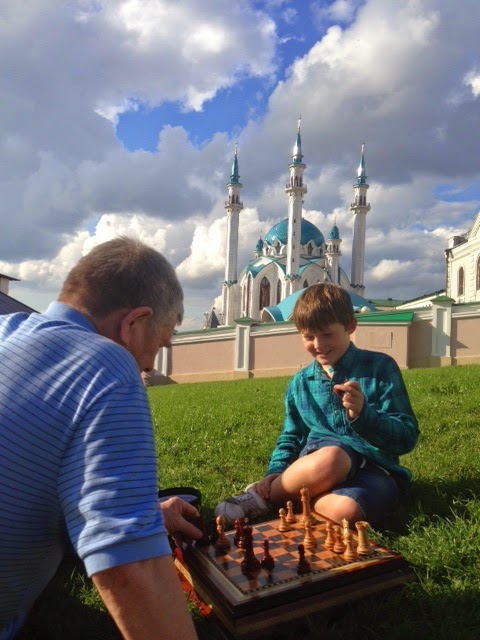 Hi everybody, this post basically sums up everything that has happened within the past month or so. So first we have the Gigafinal results. We did very well, with two people qualifying for the final round, the Terafinal. Here are the results. Shazia 3/6 U13 girls, Nadia 4.5/6 U10 girls, James 2/6 U12, Elliot 4.5/6 U12 and Tom 2/6 U11

All 5 players did well in a tough competition featuring the best players from the southern half of England. The Terafinal will consist of the 1st, second and 3rd place players from the Southern Gigafinal and the Northern Gigafinal.
Also we have our Knight champions! It was sister vs sister in the junior tournament and brother vs brother in the older final.Nardia beat her sister Zahra in the final to take home the trophy. Meanwhile, James beat Ben in the older tournament. Congratulations to both the winners and the runners up.

And finally, is it possible to start chess when you're too young? If so, then Bertie has managed to do so. Here he is pictured 11 months old already learning the game. However, Bertie's sister may be able to take Bertie's title as she come to the club last week aged just one week.

British Championships Round Up

So, that's it folks! The British Championship 2014 is over and the Knights have had some thoroughly respectable scores, not least of which was 7.5/11 (3rd=) in the main event scored by a 'Knight Parent', Richard Pert.

Below is a summary of how the rest of us got on:

U12
Niall (Member of our sister club, the Knights of Gidea Park) 3/7

Unfortunately we did not manage to take a picture of Zahra as her event was shorter and held in a different room.

So that's the British Championships over for another year! I would like to congratulate GM David Howell on retaining his title even when it looked like he was all but out of contention and also IM Jonathan Hawkins, who looked like he was certain to win with his electric 6/6 start and did not disappoint.

See you all soon!

The British Championships have just started in Aberystwyth, Wales and some of our players are taking part in various sections. Elliot, Nadia, Shazia, Zahra and Daniel (myself) are participating in some of the junior events and parents Richard Pert and Mohammad Jaufarally are also playing.

Out of the players whose sections have already begun, Richard Pert is on 2/2 in the main Championship and is playing top seed GM David Howell today. Good luck Richard!

The U16 started today and I managed to beat Prashast Vir in a close game in the first round. Tomorrow I will be playing last year's U15 winner, Paul Calderon.

Good luck to all of our Knights! 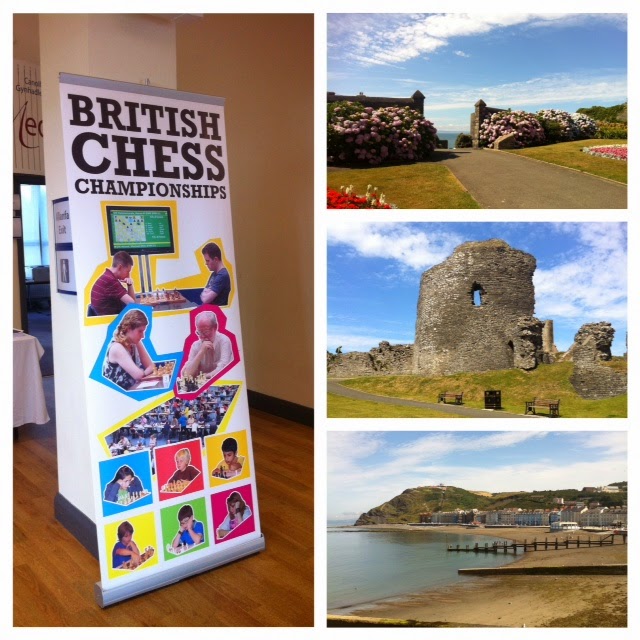 The club will be running throughout the summer

Hi everybody, this is a very short post, just to say that the club will be running throughout the summer.
The club will be running at normal time every week. Don't worry if you can't make a particular day if you're on holiday, and enjoy the last week of school (or the rest of your extra-long holiday if you go to a private school)
at 12:48 No comments:

So the club tournament has reached the knockout stages, and this is just a quick post to tell you a bit about the Knights of Chelmsford's very first club tournament.

The tournament format is that players get points for winning games against other players, or helping out with coaching, or other chess related activities. Then the four players with the most points go through to the semi-finals to play in a mini knockout tournament.

James vs Josh
Ben vs Scott

For the younger section the semi-finals are:

Nadia vs Akshay
Sebastian vs Zahra

Well done to all of our semi-finalists for making it this far and good luck to all of you in your games.

A few people very nearly made it to the semi-finals, but were just pipped to fourth place by a few points. These people deserve a mention, so well done also to Tom from the older section and Joshua from the younger section, who both very nearly made it to the semi-finals, and did extremely well anyway considering the number of participants - 15 in the older section and 23 (!) in the younger section.

Well done to all the other participants and good luck in the next tournament!

"Chess is everything: art, science, and sport." - Anatoly Karpov
"All that matters on the chessboard is good moves." - Bobby Fischer
"There are two types of sacrifices: correct ones, and mine." - Mikhail Tal

The Knights welcome young chess players of all strengths and will provide a safe environment for everyone to play and improve their chess.

The club coach at Chelmsford is Robin Slade who holds a full DBS (formally CRB). Robin will be assisted by local junior player and England international Daniel Gallagher together with other older Knights and local adult club players.

Who is the Greatest Ever Chess Player?